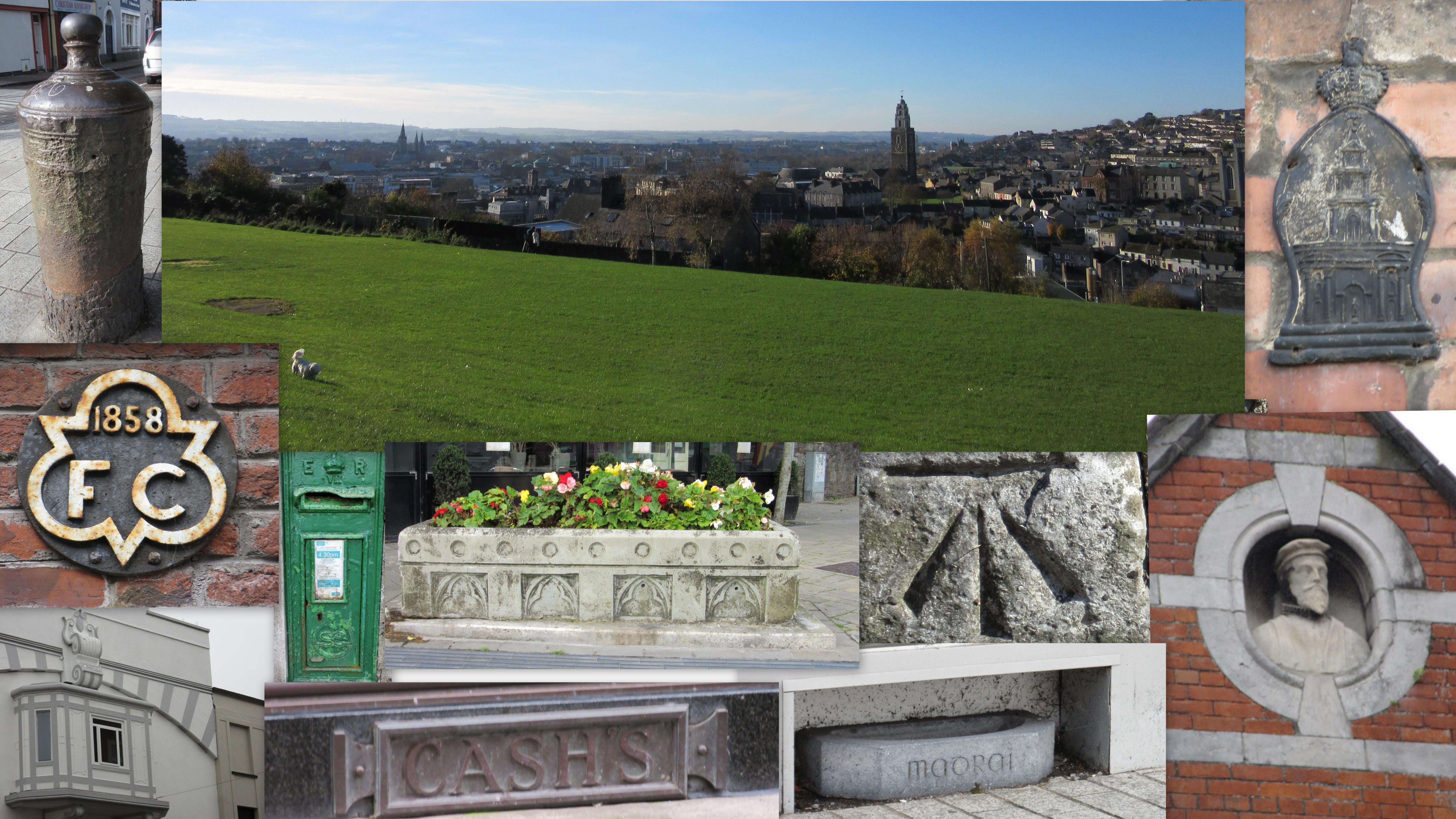 We saw these marks when we were out walking.
​
We have seen very many of them. They are generally on stone buildings near the corner and not very high. They are sometimes on pillars too.
OSI stands for Ordnance Survey of Ireland. It was set up in 1824, as part of the army, to create a map of Ireland.

​
Page 5 / 1
​Seamus Murphy lived at 6 Wellesley Terrace, Wellington Road and this is the benchmark at the end of the terrace.
Page 5 / 2
​
The Ordnance Survey was set up in Great Britain in 1791 to prepare a map to help the Navy defend the country from attack.
The map for Ireland was to allow taxes to be collected. The map had to be much more detailed than the English one.
It was expected to take five years but took 25 years to finish using over 2,000 men. The six inch map meant that one mile was six inches on the page. The final map was published in 1846.
​
When Ireland became a Free State in 1922, it was the best mapped country in the world as the maps show lots of things – churches, post offices, boundaries of fields, holy wells as well as levels.​

​One of the first things that the OSI did with the map was to create lots of triangles around the country. From the points of the triangle, they had to be able to see very many places.

On top of many mountains, there are Trig-Points which were used in the mapping. They are still there but some are damaged.
​Page 5 / 3

​I am standing on the trig-points.
Page 5 / 4
​
When the triangles were made, the distances were measured using chains.

They then used more triangles and mathematics to calculate the levels of the country.
​
The level at every crows foot benchmark is shown on the OS maps. Levels are very important for buildings and especially drains. When you flush the toilet, the drains must fall downwards all the way or the poo will come back to the toilet.
​We took a clay model of the Crows Foot on Parnell Place which is part of the project. The other photo is on Blackrock Road.
​Page 5 / 5 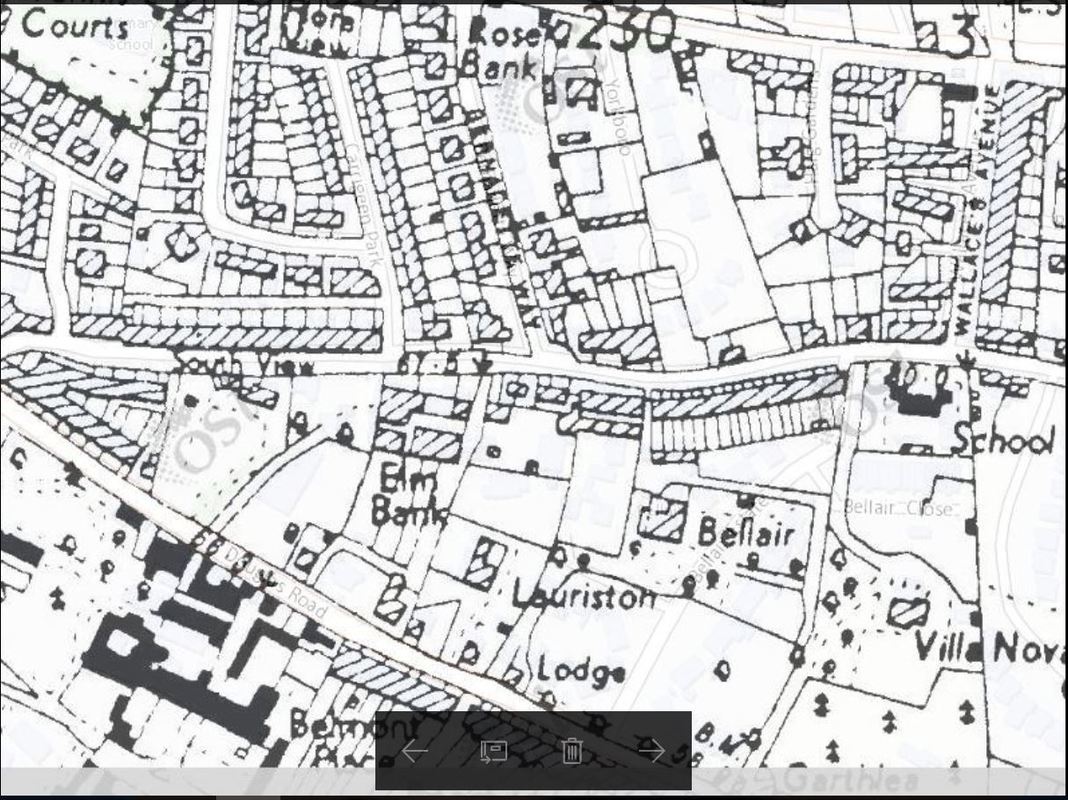 Page 5 / 6
To learn how the levels worked, we were helped by Mr. Kieran Cronin who is an Engineer and whose daughter Hazel is in fifth class.

From the O.S. map, we read that the level of the benchmark on Ballinlough Road near Bernadette Way was 67.5 feet above Poolbeg lighthouse in Dublin.

We got help to convert this to 20.574m.
It is very important that the theodolite is level. We did this by moving the legs until the bubble was in the circle. Our first station was now set.
​
I went to the benchmark and Emma took the reading on the big ruler which is called a staff. This reading was a backsight from the theodolite.
​Page 5 / 7

We then moved the staff. We took a reading at the new position – a foresight. It was 0.01.
​
The staff stayed by the pole and we moved the theodolite to a new position – called station 2.
​We took a backsight of 2.080 back to the pole and a foresight of 1.02 to near the grey wall.
Page 5 / 8
​
​We continued like this until we set a station in the school yard and took a foresight reading at the front door of the school.
Page 5 / 9
​ 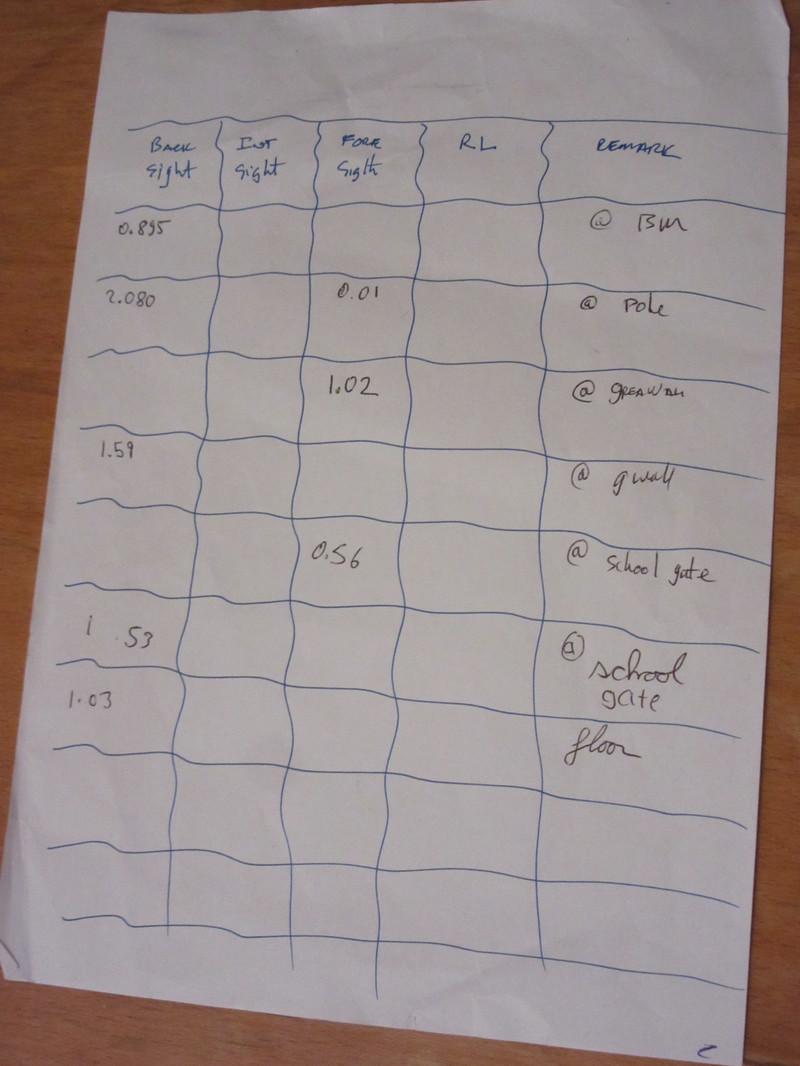 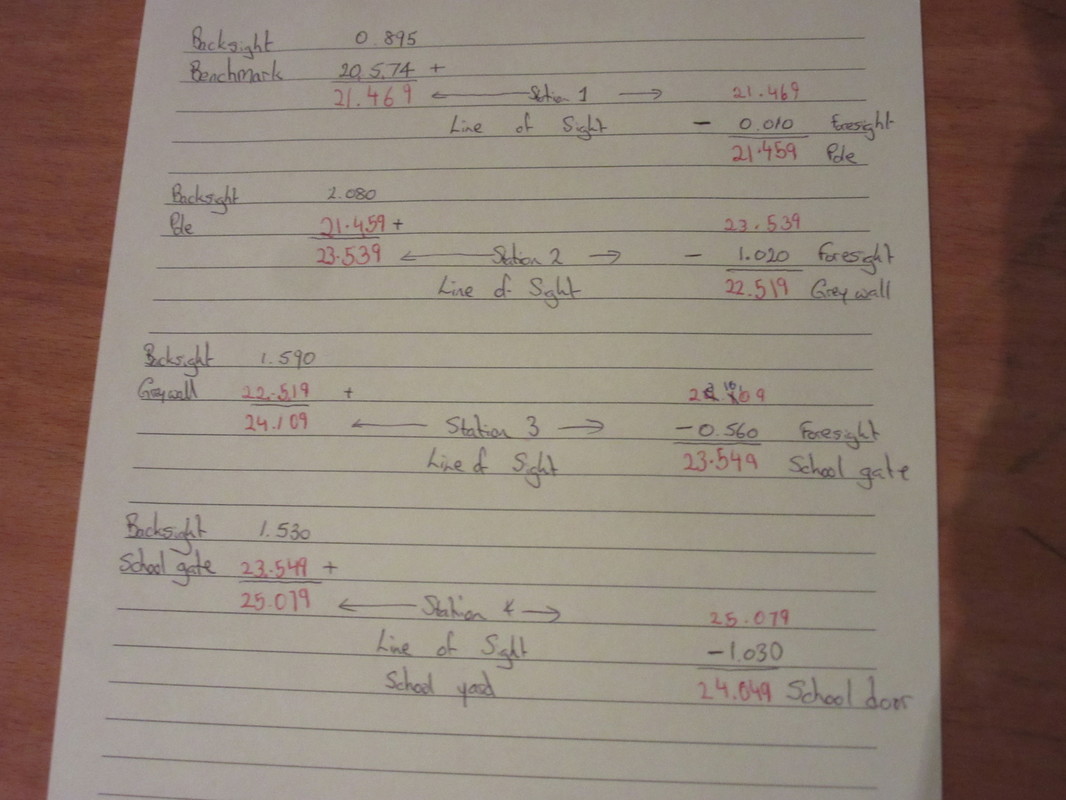 Page 5 / 11
My dad set out the form (in black writing) to calculate the level but I had to do the sums (in red writing).  He checked that there were no mistakes.
​
So I had to do maths as well as history in the project.
​The level is  24.049m above Poolbeg lighthouse.
​After writing this chapter, we found out that it was not a theodolite. What we used has a funny name. It is called a dumpy level.
Page 5 /12

We would love to read what you thought of this chapter and our project.

You can leave feedback HERE
​